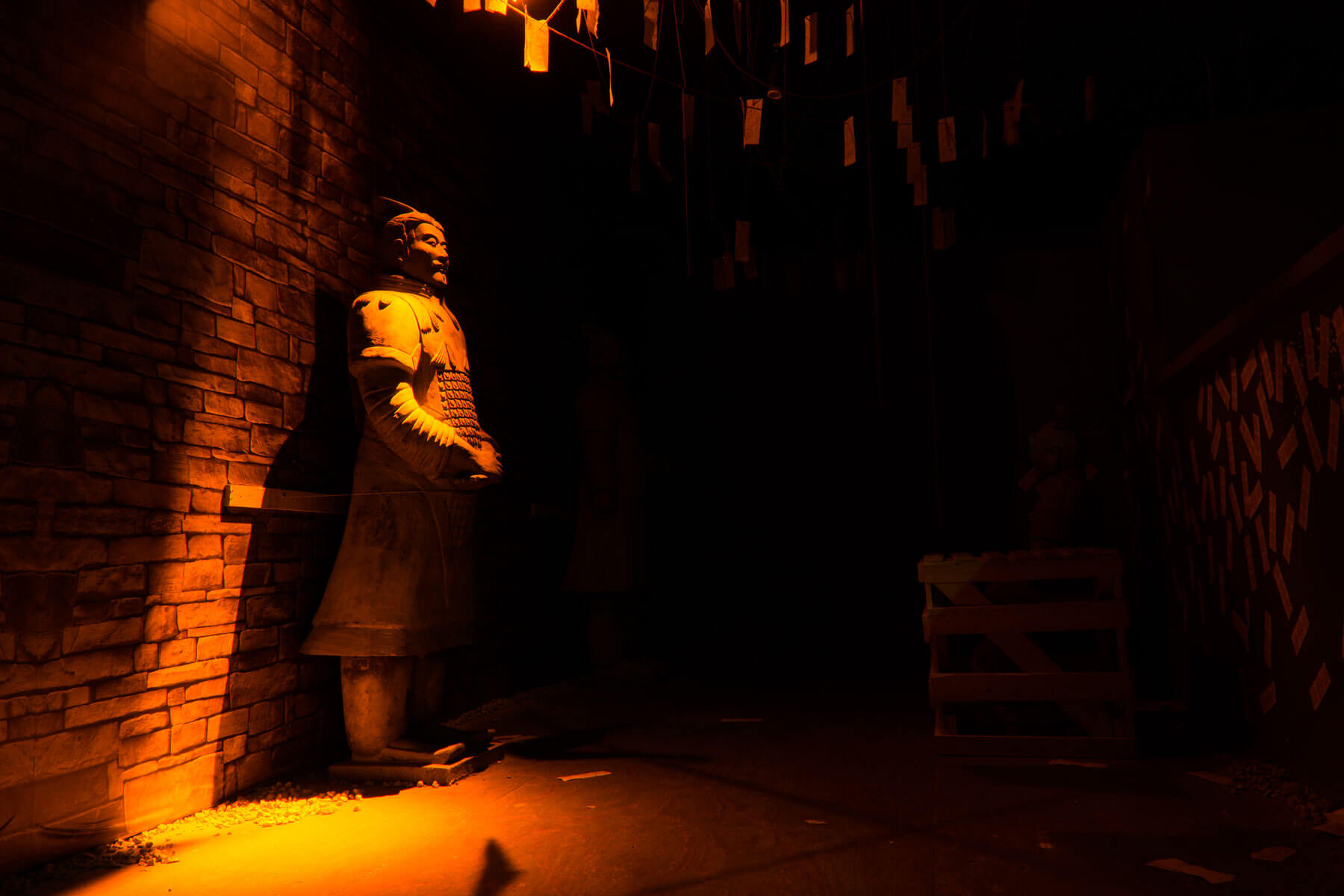 Let us begin with the secret tomb, TERRACOTTA MAUSOLEUM, a 50 minutes 2 – 10 players game with 3 STARS difficulty.

The First Imperial Emperor is one of the most prominent emperors in history. He ended the Warring States period of Ancient China, conquered many kingdoms, and established the Qin Dynasty. Years after the unification of Ancient China, the economy stabilized and brought peace amongst the people. Aside from dealing with political matters, the First Emperor also wanted to further strengthen his authority and regime.

After the First Emperor received this power, he became extremely brutal and enslaved many of his people to create an underground mausoleum of terracotta warriors. Once again, people lived in pain and despair, and the allure of the Elixir of Immortality became too much for you to bear. To fulfill your own desires, you decide to infiltrate the underground mausoleum and steal the Elixir for yourself.

It’s a little more challenging from atlantis, before i used to hate the sand that was in room two and three. But after removing it, it was a lot better now and feels much cleaner. The only thing i hate now in that room is the stairs 🙂 but everything else is fine, as more puzzles are being incorporated into the room.

The soldiers in the room cry blood and that’s scary. I like the gameplay but it’s dusty and makes my lungs sad. In a good way tho you feel me?

Simple aesthetic that nonetheless exudes a sense of unease befitting the room. The two steps involved in getting through the cabinet from room 2 too 3 is effective in delaying groups without being a complete moon logic puzzle.

A dark room full of secret pathways, puzzles and mystery. It is a step up from Atlantis but can still be enjoyed as a beginner room as well.

A dark and somewhat creepy room, perfect step up from atlantis for your second visit.

Probably the most challenging escape room I played here, with some very interesting puzzles. Creepy decor too.

Impressive replica of the infamous terracotta soldiers can be found here it’s almost like taking a time trip to ancient China.

Better now that its got no sand but its entirely too long. Doesnt need to have 3 rooms that span across 2 floors.

Also good for beginners. Definitely geared for the Tomb Raider type adventurers. Also good for those wanting something creepy.

The Terracotta Mausoleum is almost like taking a time trip back to ancient China with replicas of dust covered terracotta soldiers all carefully stationed along the journey to create the impression of a guarded secret. Those in a mood for a Tomb Raider esque adventure will find their appetite satisfied with an array of visual and text-based clues pertaining through an emperor’s art of war and the legacy of his army. A couple of secrets are set up to Just like Empire of Atlantis, Terracotta is a more specific and unique theme offering in the realm of old age fantasy and with a simple aesthetic that nonetheless exudes a sense of unease befitting the room. Traces of sand and the sounds of creaky floors is enough to complete a historical atmosphere that easily has an eerie effect. Fulfill your training, honour the brotherhood and the story of the greatest emperor that ever lived!