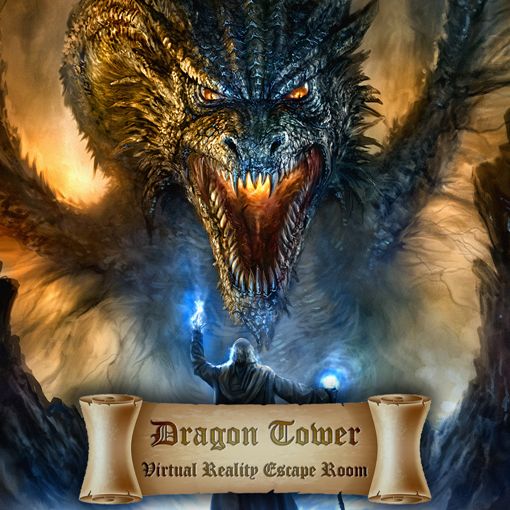 Once Upon A Time, several distant travelers came upon a small seaside town. Weary from their travels, they sought rest at the local inn.  Unbeknownst to them, the village was ruled by an evil alchemist who lived isolated in his small fortress called Dragon Tower. The alchemist kept the villagers safe from terrible dragons but did so only by feeding the dragons thieves and murderers once per year atop his tower. Alas, there was no village crime this past year, but the dragons are hungry all the same!

The alchemist instead accused the hapless travelers of being foreign spies and sentenced them to death. Can our brave travelers escape from Dragon Tower before the clock strikes 6:00 and the dragons return for their annual sacrifice?

It’s a big step for escape room.  VR allows us to create things that are physically impossible in our normal escape room.  Definitely something new and worth a try.  Us this is the first VR escape experience, I do see there is still a lot of improvement that can be made.  However, it’s overall a great and fun experience!  Definitely worth to try this new Dragon Tower VR.

Dragon Tower VR certainly gave me a different kind of experience about escape room.  Both VR and Real-Life escape room are great, but they are just great in a different way!

It feels like i am in the medieval era. Trying to escape the prison within the time limit. Very interesting and fun experience!

Dragon Tower is EXIT’s first VR based escape room including action, cooperation and puzzle solving experience.  By using the technology of virtual reality, we are able to present elements that is physically impossible.  As this is the first game we provide to the market, we believe that there are quite a lot of things that can be improved.  In the near future, we are looking to create more in-house developed VR Escape Room experience with even more refined graphic and gameplay.